Scroll down for English

END_OF_DOCUMENT_TOKEN_TO_BE_REPLACED 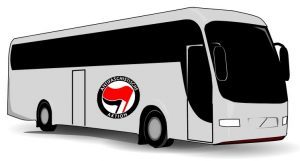 Scroll down for English

Here a friendly and yet insistent request to report what people have experienced or seen during the Pegida-demonstration and the actions against that demonstration. This request includes both people who have been arrested on May 7^th as people who were there but have not been arrested themselves. We hope you also want to file this report as a policecomplaint. But if you don’t want that, your report is still valuable!

We ask you to send us a report that is as complete as possible about what happened during that day, in as much you haven’t done this already; witness-statements, videos etc. Videos can help to gain a better insight in what happened that day. Even things that might not have a direct impact on you can be valuable, because if it is not for you, it might be relevant for others and their complaint. Please write this report as quickly as possible, because the longer you wait, the harder it becomes to remember things and to find videos and photo’s on the internet.

If you know about other people who have not been arrested but have been present that day, ask them to help you create a better/more complete idea of what happened that day. They can also make a statement about what happened. If they are for instance not arrested but are still hampered in their right to freedom of speech or reporting, this can also be reason to file a police complaint.

When you have written this first report about what happened, try to formulate one or more complaints. We want to look at all the reports and improve them together with you and other experts. We think it can improve the complaints and the effects of the complaints if we formulate

them together with lawyers who have more experience with filing complaints. After that we can file the complaints, it might even be good to do this all at once.

We are looking forward to your stories at agtilburg@riseup.net

No to Pegida: make sure your disgust is seen and heard!

Sunday, 7 May, Pegida is coming to show itself in Tilburg. Opponents of racism and fascism will not let that pass unopposed. That is why AFA Noord-Brabant calls for protest and resistance.

Pegida presents itself as ‘anti-islam’. In reality, they stoke hostility against Muslims, against refugees, and against anyone that, side by side with Muslims and refugees, stands for equality. Pegida is a racist group, with fascist leanings. Pegida marches are a show of intimidation and an effort to root themselves and build their dangerous organization. We don’t want to grant them this space, because of the unimaginable misery that threatens to prevail if they are allowed to strengthen themselves. That is why we call to oppose this Pegida rally with the strength of words and deeds.

So: come to the inner city of Tilburg, let them know, see, hear and feel how unwelcome they are. Let them know, see, hearn and feel how strongly we detest their message of hatred. Come with whistles, slogans from mouths, signs, banners, drwonn outn their speeches. Let us help to allow them the smallest possible space, so that their action comes of as badly as possible, or even fails to go through because of creative opposition.

Therefore, we call for:

1 Assemble beforhand, omn 1.2.30 hours, at the Stadhuisplein in Tilburg (1), where we will hold aa public emergency meeting:
To express our oppositiobn, against racist hatred in general, against Pegida in particular;
To discuss what we want to do against Pegida this day;
To find people tostamnd together against pegida with our message of resistance; here, more info will be available about the situation on the day itself.
NOTE: the venue may change, nown that the Pegida assembling point has been changed as well (see further in this text). Check back for updates.

2 Together, or individually or in groups of yourn own choosing, come to the Willemsplein in Tilburg – or as close to that square as possible – where Pegida assembles at 14.00 hour, and give them a fitting reception in the spirit described above. You can go there from the public emergency meeting, nearby. However, if you have a sensible plan of your own end know what to do, you may as well skip the meeting and do your thing. NOTE: assembling point of Pegida has been changed. It is now Willemsplein.

Afterwards, there will be symbolic actions, to express our connection that people search as against the harted, and to symbolically exorcise the develish Pegida poison.. Nice option for those who cannot or will not participate in the emergency meeting and/ or the direct anti-Pegida actions, maybe also a beatifull rounding off for those whe were active earlier on the day. See https://www.facebook.com/events/273891183068605/ and https://www.facebook.com/events/1417015805025505/

Protesting is not forbidden, not even when a protest is not discussed beforehand with the authorities. Such a prohibition would obviously be unacceptable. Coming together in public space to express our concern about growing racism and fascism is not forbidden either. And such a prohibition, if it existed, would be unacceptable as well. Shouting ‘boo’ against noise you detest is not forbidden, otherwise each rock festival would have a problem with angry visitors. What we propose concretely, does not fall under existing legal prohibitions. We should, therefore, be allowed just to do our thing with our whistles, voices, slogans, posters and banners and whatever you can think of.

At the same time, we know that police and mayor give their own interpretation to the law, especially during days when antifascists try to struggle against fascists. So, it may be the case that the authorities regards the public emergency meeting as en unannounced demonstration – which it is not! – and tries to ban it. Police maybe will usesrepression, violende and arrests to keep people as far away away from Pegida as possible. In short: it is possible that you will be arrested. That would be a violation of your rights, but that will not automatically stop the authorities from acting that way.

We can make arrests as unlikely as possible, by using our good sense in the actions we choose, by loooking after each others a s well as ourselves, and by keeping as calm and in as good spirits, as possible. Legal assistence will be available for cases like that. Extensive information can be found on “Arrested? You should know this!” Just read it, to be on the safe side of things.

Note:
The part of the Stadhuisplein where we want to assemble is alongside the road, between the bus stop and the Stadswinkel, under the trees, at the location where Opccupy had its tents in 2011.

See you on 7 May in Tilburg!

For the call-out in English, see

“Say NO to racist Pegida!”